Asians continue to remain significantly under-represented in the boardrooms of America’s largest companies compared to their presence in the professional workforce, according to an updated report from Ascend Foundation, Ascend Pinnacle, and KPMG LLP, the U.S. audit, tax, and advisory firm. Despite representing the fastest growing racial or ethnic group in the United States and being more highly educated than the overall U.S. population, with a wealth of talent to offer, Asians (defined in the report as all people of Asian or Pacific Islander ancestry) still are among the lowest represented in the most senior corporate positions.

Although Asians represent 13% of the professional workforce in the U.S. in 2021, they constitute only 6% of U.S. executives in America’s largest companies, and hold only 4% of public Fortune 1000 board seats. Although nearly one-third of Asian directors were added to some of these boards within the last three years, over two-thirds of Fortune 1000 companies, nearly 70 percent of Fortune 500 companies, and nearly 60 percent of Fortune 100 companies still do not have an Asian director on their board. From a global perspective, more than half of consumers live in Asian countries and their spending is expected to represent half of the world’s consumer spending by 2032, with India and China predicted to have the greatest increase in their consumer classes. Given the high representation of Asians in the workforce and among consumers, the pipeline of Asian talent continues to be underutilized in the boardroom. 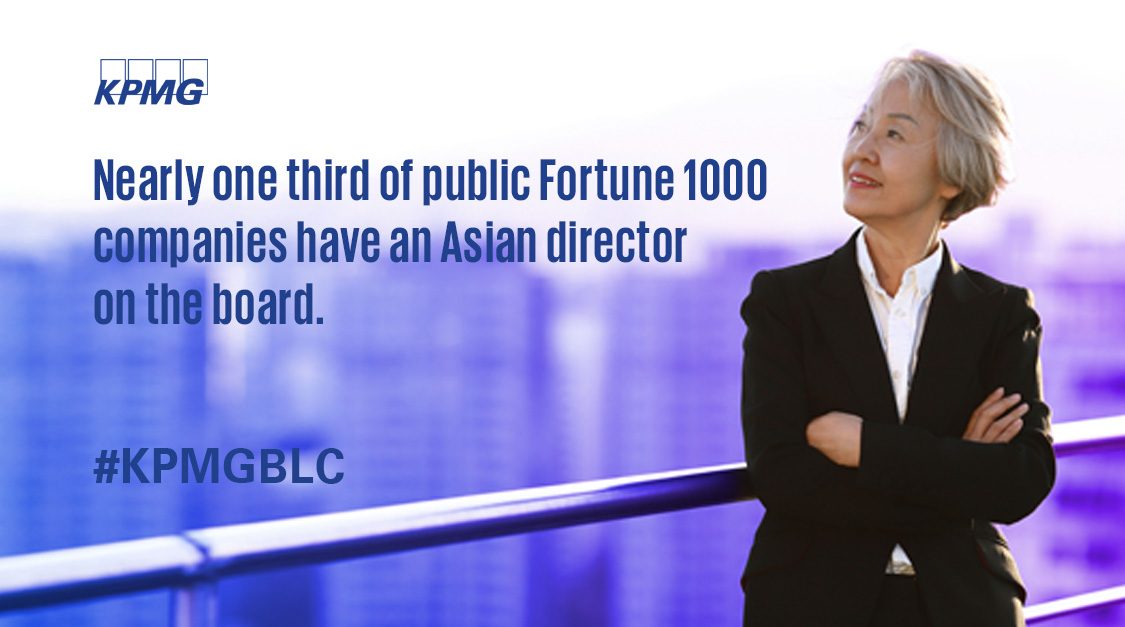 The 2022 report marks the second year Ascend Foundation, Ascend Pinnacle and KPMG Board Leadership Center have conducted this first-of-its-kind series focused on Asians on corporate boards.  The inaugural report noted that in 2020, 72 percent of Fortune 1000 companies did not have an Asian director represented in their boardroom. The 2022 report based on data from 2021 shows only a negligible improvement: 69 percent of public Fortune 1000 companies still do not have an Asian on their board. In the case of F100 companies, the percentage of companies that still do not have any Asians on their boards has remained essentially unchanged (58 percent in 2020 compared to 57 percent in 2021).

“Despite the increased attention and focus on diversity and equity in companies, the continuing absence of Asian directors from America’s top boardrooms is deeply disappointing,” noted Anna W. Mok, President and Board Chair, Ascend and Ascend Foundation, Co-founder, Ascend Pinnacle. “Due to the Model Minority myth, and the ongoing perception that Asians do not have workplace advancement challenges, many people may not be aware of the continuing under-representation of Asians in leadership at the highest levels of American companies and in their boardrooms. This latest report is a clarion call for all of us to redouble our efforts to increase both awareness and representation.”

“We have ample board-qualified Asian talent in the marketplace,” added Jeannie Diefenderfer, Lead Executive Advisor, Ascend Pinnacle. “Asian directors offer not only unique talents and skills, but the multi-cultural perspectives, experiences, and wisdom that are and will be, in the years to come, even more invaluable in an increasingly global and inter-connected world. We have to keep feeding the pipeline for Asian talent and ensure that it reaches into America’s top executive suites and boardrooms.”

“It is critical to have our corporate boards reflect the diversity of their company’s customers and employees,” said Susan M. Angele, KPMG Board Leadership Center Senior Advisor. “Research has shown that diversity can help improve board decision-making and diverse boards are more effective on a variety of measures, including financial performance, risk oversight and sustainability.”

“We have been delighted to work with Ascend Foundation and Ascend Pinnacle for a second year on this important contribution to discussions promoting racial and ethnic diversity on America’s corporate boards,” Angele added.

KPMG is a firm with a history of doing great work and making a difference.