Bank CEOs in the United States, as well as 42 other countries, took time in this unparalleled moment, to share information about their organization’s prospects, as well as their attitudes and activities in leading their businesses with increased purpose and impact, both societal and economic in KPMG’s 2020 CEO Outlook Survey, COVID-19 Special Edition.

Foremost among their actions are efforts to protect their people, build trusted relationships with customers and communities, and define a new future of growth and success for their organizations.

KPMG initially surveyed 1,300 CEOs in January and February, before many key markets were beginning to feel the full impact of economic lockdowns caused by the global spread of the COVID-19 virus. Then, in July and early August, KPMG conducted a follow-up ‘pulse’ survey of 315 CEOs to understand how their thinking had evolved.

Executives in 11 industries were surveyed in the ‘pulse’ survey. The largest number of respondents were in the banking industry, comprising 14 percent of respondents. 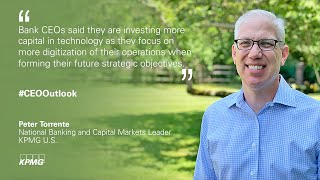 Even as medical teams and government entities around the world continue to confront the impact of the COVID-19 virus, banking CEOs said they are focused on finding opportunity amid current industry, societal, and overall economic adversities.

A number of key themes emerged from the post-COVID survey of bank CEOs:

More than 8 in 10 U.S. bank CEOs said they were confident about revenue growth over the next three years, which was slightly more than the percentage of global bankers, and the CEOs of the other 10 industries represented in the survey.

Similarly, U.S. bank CEOs expressed more confidence about their overall sector’s and their country’s prospects for revenue growth than did their banking counterparts around the world and the CEOs in the other industries in the survey.

Threats to growth – other than those presented by pandemic risks:

Aside from global health security / pandemic risks, a number of shared risks were identified among all respondents that are posing significant threats to their organizations’ growth over the next 3 years.

Impact of the focus on digitization

Respondents across the board reported that there has been a rapid acceleration of the digitization of operations and the creation of a next-generation operating model. Those new digital business models already are having a positive impact on revenue streams, putting the reporting organizations far ahead of where they had expected to be pre-COVID.

A majority of bankers, as well as the cross-industry respondents, also reported a high level of progress in the creation of a seamless digital customer experience since COVID-19 infections began to spread.

Increasing efforts to improve digitization is having a marked influence (especially among U.S.-based banks) on workforce models, with more augmentation of automation and artificial intelligence with human workers. Across the board, nearly three quarters of CEOs in all industries in the survey said their organizations would be downsizing their offices.

And, as bank CEOs think about their major strategic objectives as they respond to the crisis and prepare for the “New Reality,’ they reported prioritizing investing more capital in technology as they focus on more digitization of their operation when forming their future strategic objectives.

The value of communication, especially in the remote working environment

The large majority of CEOs said their organization would continue to build on their use of digital collaboration and communication tools, adding that communications with employees has improved during the crisis.

The widespread WFH phenomenon, most CEOs said, has had a positive influence on their corporate culture.

The large majority of bank CEOs in the United States, as well those around the world, say there is heightened awareness within their organizations, after a re-evaluation of purpose since COVID-19 struck, of the need to use their corporate purpose to help drive action in addressing the needs of employees, communities, customers, partners and investors.

They said purpose provides a clear framework for making quick and effective decisions and that they feel a stronger emotional connection to their corporate purpose since the crisis began.