Global auto executives are confident that the auto industry will see more profitable growth in the next five years and that the market share of electric vehicles will grow dramatically by 2030, according to a new survey by KPMG. At the same time, supply chain issues and labor shortages are of great concern.

KPMG’s 22nd Annual Global Automotive Executive Survey of 1118 executives across automotive and adjacent industries found that 53% are confident that the industry will see more profitable growth, compared to just 38% who are concerned about profit prospects. The survey, which included 372 CEOs, found that executives’ confidence extends to other areas as well, including the industry’s ability to withstand the next great disruption.

“It’s encouraging to see such widespread optimism about the growth prospects for the auto industry,” said Gary Silberg, global head of automotive at KPMG. “Car manufacturers have rarely faced such an array of technological and business-model changes since the dawn of the automotive industry 130 years ago. Flying taxis, cars by subscription, ubiquitous and fast EV charging stations, big-tech car entrants — these are some of the developments we can expect in the next 10 years.” 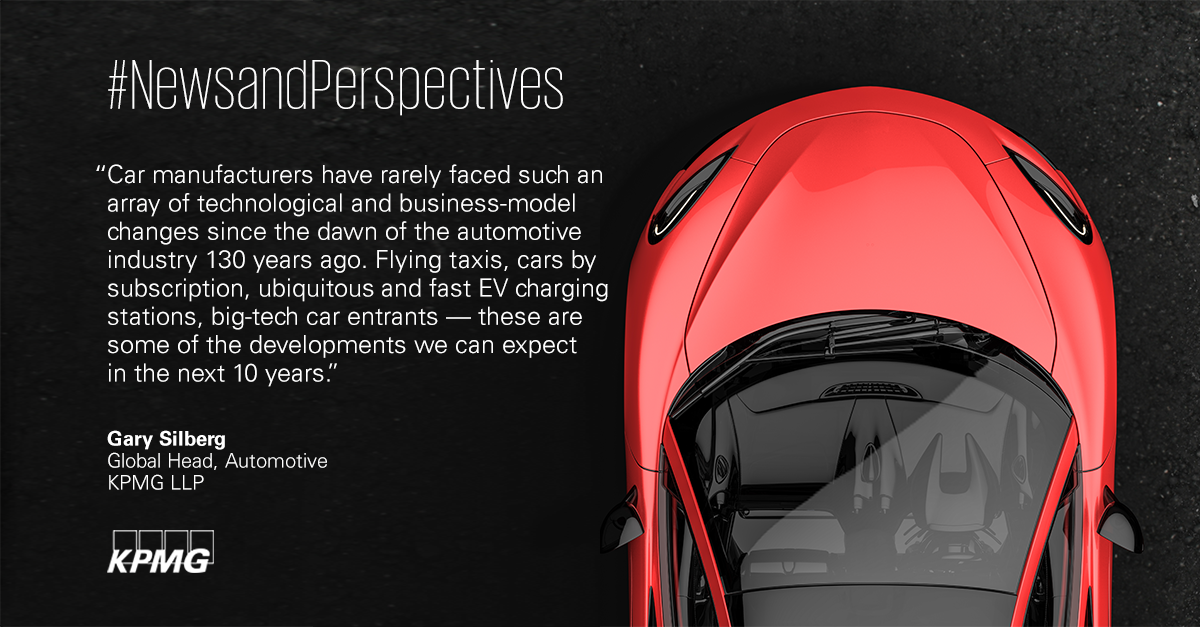 The news, however, is not all rosy. Executives are worried about a range of issues affecting the supply chain, including the price and availability of semiconductors, steel, rare earth elements and other scarce materials. Over 50% of respondents were “extremely” or “very worried” about the supply of these materials. Furthermore, 55% of executives are very or extremely concerned about labor shortages.

“There are urgent questions executives need to answer right now: Have they learned recent lessons to build more resilient supply chains and address labor shortages?” Silberg said. “Auto manufacturers are competing for talent not only among themselves but also against other industries. We will see executives taking lots of time in the coming years to problem solve these risks.”

EVs on the rise

Executives expect the market share of EVs to grow dramatically, though there is no consensus about what market share it will capture.

EVs’ popularity will depend partly on significant investments in DC fast-charging infrastructure; 77% of executives expect consumers to require charge times under 30 minutes when traveling. Most charging stations in service today take more than three hours.

The survey also found that expectations for the EV market are based on when EVs will reach cost parity with internal combustion engines. Most believe EVs can be widely adopted without government subsidies (77%), but the majority still support such programs (91%).

The rise of new entrants and the shift to digital

The technology and automotive industries are converging, leading to new alliances and new entrants. Start-ups are raising billions, and executives believe tech companies such as Google, Apple, Amazon and Huawei will enter the market.

Furthermore, 78% of executives agree that there will be a fundamental change in how vehicles are purchased in the coming years, saying that most will be sold online by 2030. And about three-quarters predict that more than 40% of vehicles will be sold directly by automakers to consumers, bypassing dealers.

The survey also discusses questions such as:

KPMG conducted a global survey of 1,118 executives across automotive and adjacent industries in August 2021, including 372 CEOs, 325 other C-level executives, 169 heads of business units and departments and 252 managers. About a quarter (24%) work for car manufacturers, and 13% for Tier-1 suppliers. Truck manufacturers employ 11% of respondents. Companies with annual revenues of more than $10 billion in 2020 employ 27% of respondents, while 35% have annual revenues between $1 billion and $10 billion and 38% have revenues less than $1 billion.