Government agencies and other public sector organizations are striving to become more efficient and transform to meet the evolving needs of their constituents. Four leaders from the U.S. Department of Veterans Affairs, State Department, FBI, and the Florida Department of Children and Family Services have joined KPMG’s Government practice to help clients in their transformation.

“Pam, Michael,Maria and Chad bring extensive experience and deep insights about their fields and government that are critical to assisting our clients in today’s environment,” said KPMG Federal Advisory Leader Brenda Walker. “They augment our strong practice, and we will continue to invest in talented individuals who have the knowledge and skills that our clients value most.” 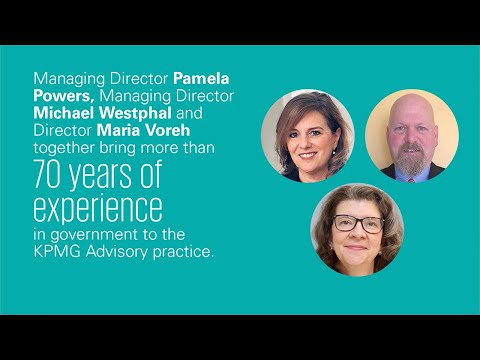 Pam Powers
Previously, Powers was the Acting U.S. Deputy Secretary of Veterans Affairs. Prior to that time, she worked in senior-level roles at the Pentagon. Powers retired from the Air Force as a Colonel and served almost 30 years in the Active and Reserve forces. She was selected by the HillVets Organization as one of the 2019 Top 100 most influential and impactful veterans and supporters and selected for a Leading for Impact award from Federal IT Consulting.

Michael Westphal
Previously, Westphal served as the Deputy Special Presidential Envoy for Arms Control at the U.S. Department of State, where he was responsible for coordination among the U.S. Diplomatic Corps, interagency partners and foreign embassies. Prior to that time, he was Chief Operating Officer at Real Time 2, LLC, a service-disabled veteran-owned small business.

Westphal is a graduate of The Citadel, The Military College of South Carolina.

Maria Voreh
Voreh comes to KPMG after more than 25 years at the FBI. During her FBI career, she served in a variety of technical and managerial roles supporting domestic and international law enforcement and the intelligence communities. Appointed FBI Chief Data Officer in 2017, she was responsible for overseeing the FBI’s strategy for enterprise data management and leading Bureau-wide data initiatives. Voreh led the development of the first FBI Enterprise Data Strategy, published in 2018. Prior to joining the FBI, Voreh worked at the U.S. Naval Research Laboratory in Washington, D.C.

Chad brings nearly 20 years of both government and consulting experience to help us seize new client opportunities, particularly in the State of Florida.

Most recently, Chad served as Secretary of the Florida Department of Children and Family Services. Prior to that time, he was an Industry Client Leader at IBM, selling large technology-enabled solutions to state and local clients. He brings experience leading other state and local government agencies involving labor, commerce, human resources administration, and government operations.

Chad earned both his Master of Science (M.S.) and Bachelor of Science (B.S.) degrees from Valdosta State University.

KPMG’s more than 1,600 dedicated partners and professionals possess the knowledge, insight and awareness of pertinent legislation and regulatory implications needed to address the special needs of the government and public sector.

For more information about the Government & Public Sector practice and its reports, or to arrange an interview with one of the practice’s leaders or subject matter specialists, contact Mike Alva.