Talent is a top risk at technology companies

Planning for the future remains highly complex, and talent is one of the top concerns at technology companies. At the beginning of 2020, tech company leaders surveyed in the global KPMG technology industry CEO study ranked talent risk ninth in a list of threats to technology company growth. By late summer and well into the COVID-19 pandemic, talent was tied with supply chain and a return to territorialism as CEOs’ top concern. Adjacent to this talent risk, tech CEOs also cited a lack of IT skills as the biggest hinderance to digital acceleration.

The pandemic has brought human concerns to the forefront, and tech CEOs recognize that losing key people—and attracting specialized skills—can have a significant impact on growth. As part of the social component of Environmental, Social and Governance (ESG), leaders also acknowledge their responsibility to look out for employees’ mental and physical health as well as nurture the skills needed in today’s digital enterprise.

Another KPMG study, the American Worker Survey, conversely looked at employee perspectives. In the survey, 84 percent of tech workers indicated their jobs were more demanding several months into the pandemic. Yet even amid increased demands, technology employees were less likely to say their mental health had decreased (28 percent of tech workers versus 45 percent of workers in other industries) and more likely to report higher productivity (78 percent versus 71 percent). 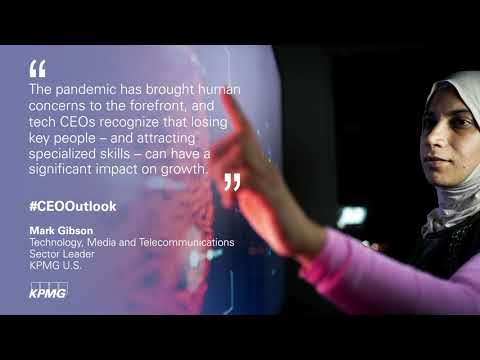 The findings suggest, however, that “talent risk” is not exclusively an executive fear. Tech workers expressed concern about job security amid a weak economy and digital transformation. About 6 out of 10 reported worries about being laid off or furloughed—significantly more compared to other American workers surveyed (46 percent). Tech workers were also more fearful of being replaced by technology (59 percent versus 36 percent). This suggests tech workers may be closer to, and therefore more informed about, emerging technologies and trends that will reshape how work gets done.

Those fears may be legitimate. Most executive respondents in our tech CEO study believe the pandemic has fast-tracked a new workforce model—with human workers augmented by automation and artificial intelligence—by months or even years. What’s more, tech CEOs indicated they are more likely to invest their capital in technology instead of their workforces’ skills.

If tech companies cite talent as a top risk and a lack of IT skills as hindering digital acceleration, why are most CEOs prioritizing investment in technology over people? Several tech giants have announced ambitious plans to upskill their workforces, but that isn’t the industry norm.

The new work-from-home paradigm may explain some of this. More than half of tech company CEOs told us remote working has broadened their potential talent pool. It’s now easier than ever to acquire new skills since geography is less of a factor. Indeed, according to the KPMG report, The new employee deal in the technology industry, 91 percent of global tech leaders indicated that they are hiring new skill sets into the organization to prepare their workforce for new technologies.

As the path to the new reality takes shape, tech CEOs and their workforces will navigate it together. For executives, talent will continue to represent a significant risk. For employees, it may be new technologies that pose a threat. Finding a way to retain top talent—while seizing opportunities to upskill them even as new people are hired from outside—may provide the balance needed to achieve long-term, sustainable growth.